“Cancer Is Not Pink”is a place where I can keep track of every step of this journey as I move breast cancer out of my life. This blog is not dedicated to writing about breast cancer exclusively. I love to write and will mix fun into my writings here as I join writing and photography communities. But, for now, back to breast cancer, it’s amazing how much has already become foggy in only a week, there is so much going on.

So far, everyday, since they called me back for the 2nd mammogram, my life has become “about” appointments and networking with family members and friends who have survived breast cancer.  Every story differs, every cancer situation is unique as well as courses of treatment.  Yet, I have been diligent talking with so many cancer survivors and so thankfully blessed that yes, these women are a part of a sisterhood that none chose to join, but willingly put themselves out there to help other women who are just beginning their journey, like me.

As I said, this is my journey, my journal, to help me remember dates, tests, procedures, appointments and whatever else I may need to remember. It may also be of benefit to my family since there is a strong history of cancer on both maternal and paternal sides. It is not intended to give advice to anyone, but, if sharing my story may be of help to someone, that’s good.

My initial diagnosis came on June 24, 2013…I received the particulars of the Biopsy report EXCEPT for the prognostic marker studies. Here are the particulars:

Researching this at Johns Hopkins, I found the following:

“well-differentiated” means this is not an aggressive cancer – good news!
“infiltrating mammary carcinoma” means even though it is not aggressive, there’s always a possibility that it could spread. BUT, I am feeling lucky! Right?
“focal tubular features” is a particular type of the well-differentiated aspect with a good prognosis.

This is good news!!
A little bit more “about” me… 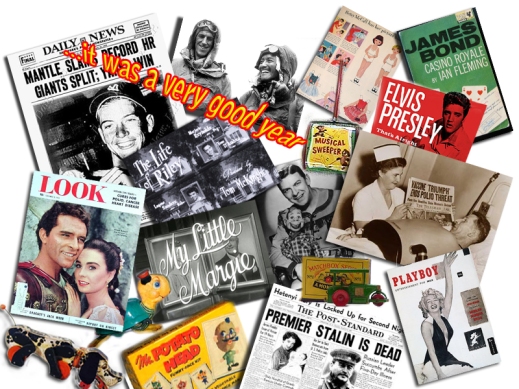 I thought I’d have a little fun with my “About” section. I made a little collage of events happening in the year I was born, along with popular television programs, magazines, and newspaper headlines. Here are a few things that were going on, the day I was born:

• The White Sox lost to the NY Yankees 1-0 with the Yankees scoring the only run of the game in the 2nd inning
• Morning temperature in Chicago was 64 F, humidity 54% and no rain
• Swanson’s sells its first TV Dinner
• Senator John F. Kennedy (D-MA) and Miss Jaqueline Bouvier of Newport, RI, will be married days later
• #1 song on that day, Les Paul and Mary Ford – Vaya Con Dios
• What was on television? The Life of Riley, Mr. Peepers, Make Room for Daddy, The Honeymooners, The Adventures of Superman, George Burns and Gracie Allen, The Howdy Doody Show, The Lone Ranger and actually many, many more shows were in production.

Other events which happened the year I was born:

• Average cost of a new home, $9,550.00
• Average wages per year, $4,000.00
• Cost of a gallon of Gasoline, 20¢ per gallon
• Average cost of new car, $1,650.00
• Sir Edmund Hillary and Tenzing Norgay perform the first successful ascent to the summit of Mount Everest
• Stalin died
• Dr. Jonas E. Salk, announced a vaccine had been used safely and successfully used in preliminary trials on 90 children and adults as a polio vaccine
• Ian Fleming publishes his first James Bond novel, Casino Royale in the United Kingdom
• Playboy Magazine’s 1st issue features Marilyn Monroe as its first cover girl and nude centerfold.
• New York Yankees win fifth world series in a row
All the roads I’ve traveled and people I have met contributed to who I am today – wife, mother, grandmother, freelance graphic artist, web designer, retired Finance Manager and new to the list, Blogger!

Thanks for stopping by!

Since beginning this blog, as I have been counting down my own five-year survival mark after having breast cancer removed from my body, a tragedy struck in June of 2015. One of my sons, Mikey, was diagnosed with pancreatic cancer and died after a grueling experience with it. I have forever been changed, especially after watching him die slowly before my very eyes.

DISCLAIMER: The information contained in my blog is about my experience and in no way is intended to suffice for medical advice.

Thoughts on this? Cancel reply

This site uses Akismet to reduce spam. Learn how your comment data is processed.